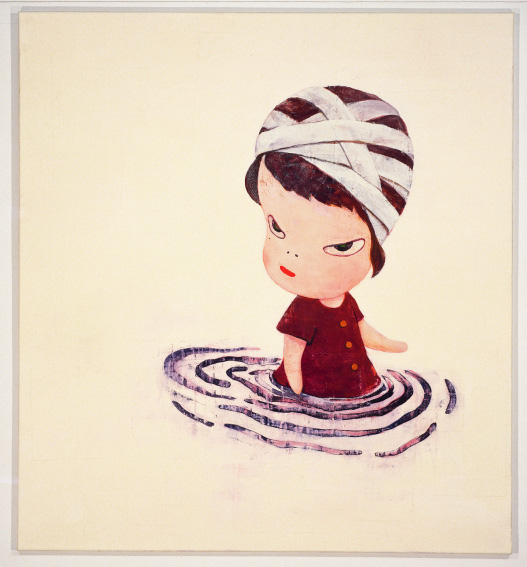 Touching the skin of the present

“There is an old lifestyle that stays alive in some small corners of the city, but the fantastic thing about Tokyo is that this is a completely new context where the past, present and an expectation of the future are not so divided” P.L.T.

Pier Luigi Tazzi: Coming from central Tuscany, I believe that there is a big difference between the place where I usually live and Tokyo, the city where I happened to stay for more than a year.

The last time I worked with David Elliot, the current director of the Mori Art Museum Tokyo, we created an exhibition in Stockholm called Wounds. The exhibition was about laceration, a feeling I have quite often in Europe, especially in Italy and even more so in Tuscany.

In Tokyo, I found the situation completely different because I don’t feel what might be called a dichotomy. I think that there is an old Japan; a certain kind of tradition that is maintained or that has been challenged and removed. There is no break, no wounds.

And if you compare this situation with that of other big cities all over the world, what I found to be extraordinary in Tokyo is this new possibility of articulating different levels of cultural life and habits, ways of using the city, as well as functions within the city.

At the same time, if we consider it in relation to the well-known European and western tradition, where art is the expression of the cultural substance of a place, we notice that there is a gap. If you confront the very substance of the city with the local whereabouts of contemporary art, there is a big difference. I think really there is no artist, no group of artists that can express the powerful energy of this new context. You do, however, have special artists. The other day, we had a conference with three artists: Araki Nobuyoshi, Kawamata Tadashi and Nara Yoshimoto. Three people with different expressions of Japan.

Samuel Fuyumi Namioka: I am very curious to know why you think this kind of situation you have here doesn’t create conflicts or the kind of dichotomy which you might find in Europe? Is it because of the culture that is absorbed or because of the culture that is not as strongly built as in Europe. This Japanese culture like resoma or “structureless culture” could absorb any kind of impact. Why would such a deep impact not create a dichotomy?

PLT : It may be due to two reasons. On one hand there is a different concept of history which is not so linear here. On the other hand there is tolerance – I don’t know if you can call it tolerance -, but anyhow I think that in Japan the past is something that is different from history from a European point of view.

The present is so thick with signs and needs that there is no time for real life and so everything is projected into the future and I think that this can be true not only in Japan but in the whole of East Asia as well.

“The future is really something that is going to happen two minutes later, the day after or in eternity. There is an expectation of life that in Europe we can forget because the weight of our history is so heavy, overwhelming” P.L.T.

Mami Kataoka: I think in Japan we also have a long history, but our history is a kind of succession of adaptations or absorption of other parts of the world. First, in trying to imitate and then in creating something of our own. Young artists born after the 1960s and 1970s haven’t really experienced the bubble economy.

They didn’t see the dream but just knew it was part of history without having been able to benefit from it. However, I think they are quite hopeful about what they can do, and they aren’t really complaining.

This is true not only of artists but also of architects and designers who aren’t so pessimistic about the state of affairs because they are accustomed to recreating something from what they have.

PLT: Here in Japan, you have some dominant expressions of creativity that are mostly fashion, architecture and design making life easier for these designers but making it more difficult for artists, even in economic terms.

In Tokyo where the emphasis is on fashion and design, you really have great things. Three cases come to mind. One can’t help wondering which one is the “original”: the Prada space in Milan or its new building in Omotesandō, designed by Herzog & de Meuron; the Louis Vuitton in an old classic house in Avenue Montaigne in Paris or its shiny building by Jun Aoki in Roppongi; Hermes on the Champs-Elysées in Paris or Hermès designed by Renzo Piano in Ginza? Also in economic terms: Prada, Louis Vuitton and Hermès pay more here than in their own country. This is what makes the whole situation of this area extremely energetic.

MK: I sometimes think that Japan has a tendency of “Akogare”. Something close to expectation, yearning, a desire to be something. When you see all these people queuing for rock concerts, the motivation comes from that kind of feeling of wanting to be something that already exists and not really wanting to create something of your own.

People go to Louis Vuitton or Prada because they have money to spend but also to become the image they have of these brands. This attitude creates another kind of positive energy not only for the market but also in terms of a yearning for a better life.

PLT: Even the concept of beauty in Japan is different because in Western tradition beauty is something you share, think for instance of cities like Paris or Venice. This kind of monumentality is made to be shared with others, you go there and participate in a collective experience. Here beauty is something you have to achieve for yourself, and sometimes according to the tradition, you even hide it. There is this amazing, never-ending pursuit of beauty. Art is also determined by situation, and everything here in art appears to be so partial.

Samuel Fuyumi Namioka: When I curated a Japanese contemporary art show two years ago at the Pecci Museum in Prato, I invited 14 artists. I noticed an underlying ephemeral feeling. They were living in the present and looking to the future. The title of the exhibition was There Future Perfect, implying that the past doesn’t exist and that they are living now in this moment. If it disappears, they are quite happy with a kind of accumulation of the present to prepare for the future.

I had the opportunity to ask Araki about the ephemeral notion I find in his pictures, to which he replied that his life itself is ephemeral. This is the typical attitude of Ukiyoe and of a floating world. I can perceive that element in Yoshitomo Nara and in many other Japanese artists’ work. I don’t think they are conscious about it but there begins the significant difference between Western and Japanese art, although I don’t like to separate them.

Samuel Fuyumi Namioka: You both mentioned the history and the difference with the notion of history in Europe. People tend to refer to Japan as a post-modern society, do you agree with that?

PLT: My first thoughts are that the whole idea of postmodernism is absurd. If I had not lived in Tokyo for that one year, I would say that here you are preparing a new model, but I cannot use the word “model” anymore. There is no model, there are only different measures, a multiplicity of possibilities which is what this city is all about. You can find yourself in a completely different environment just around the street corner. In this way it’s not that history is negated, it’s the European concept of history which is challenged: past and present can live together and be very close.