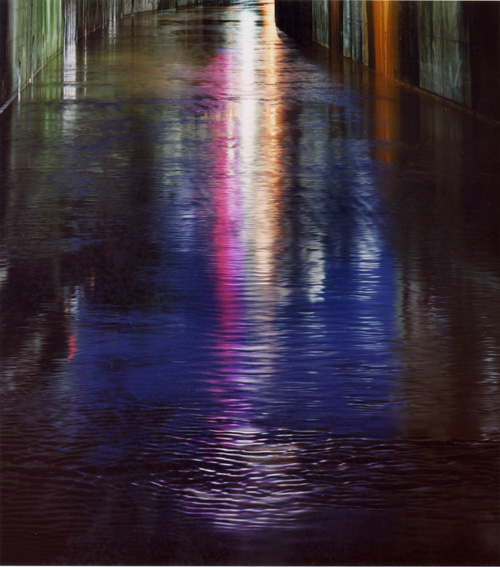 A conversation between photographer, Naoya Hatakeyama and curator, Fuyumi Namioka

Fuyumi Namioka: From a foreign point of view, I wonder what the appeal of Tokyo is?

Naoya Hatakeyama: Foreign intellectuals find Tokyo interesting since it is not a rational city, but rather spontaneous and fickle.

N.H.There are few areas here that are controlled by a sense of reason. So I understand how foreign intellectuals fall in love with Tokyo, but I don’t think that Tokyoites share the same feeling.

F.N. The photographer Araki sees Tokyo as the equivalent of the image of self. What is your relationship with Tokyo?

N.H. I am fond of the spiritual part of Tokyo that is not so clear, those unconscious, or conscious, yet impossible to analyze sections.

N.H. I am interested in being able to clearly see such moments. Tokyo has many of them, and I think generally speaking cities would be much more interesting when we can think of them with a greater sense of distance.

F.N. When you think of a time axis with past, present, and future, where do you see Tokyo today?

N.H. Intuitively, I have the feeling that there is no past nor future, but only the present. After all, there is no kind of monument that remains as a reminder of the past here. There is no visible sense of history.

F.N. Would it mean that Tokyo is frozen as it is in some kind of medium?

N.H. I think that photographs can strongly radicate people in a certain consciousness of time. So, if there were no photographs of Tokyo, the city would always be current. Because we have photographs, I think we somehow have the thread of history in our consciousness. Though we aren’t usually aware of the flow of time, photographs arrest moments of time and so bring life to them.

F.N. Have you ever thought of taking photos focusing on the beauty of Tokyo?

N.H. My work on Tokyo is basically vertical. From high places down to below ground level. Although I noticed this only after taking pictures.

F.N. How did you come up with this vertical element?

N.H. Today, for instance, I have been on elevators several times, maybe about four times already. And when moving by subway too I open a map and imagine the city above me. I began climbing high places to shoot in 1989. Then, one time when I laid out my photos side-by-side. I found out that my work was essentially centered on these sorts of points and times.

F.N. Is there some spot in Tokyo you really like?

N.H. Well to answer the reverse, I don’t like Shibuya at all. It’s so tough to walk around. Maybe once you grow accustomed to the place and distance that people maintain in Europe, walking in Tokyo becomes stressful.

F.N. On the whole this city is not beautiful, but shifting how you look at things brings into focus more and more of its pretty details.

N.H. Living in Tokyo you learn to discard the things you hate about living here, and learn to look only at the things that are important to you.

F.N. Your photographs are completely devoid of people. How come?

N.H. Even as a child, my personality and sensitiveness played a big role in this. And when looking at photographs of people, I feel quite sad. I can get the sense that they are no longer around, and I feel like crying. I think that people who can take photographs of people are either unaware of this sense of tragedy or are really able to accept it.

F.N. Looking at a photo of an uninhabited Tokyo gives me a feeling of death and emptiness. Then immediately afterwards a great throng of people appear suddenly out of nowhere, bringing with them a tremendous feeling of energy and life.

F.N. This repeating, cyclical image of life and death is very much present in Tokyo.

N.H. Since about 10 years ago, I’ve thought there are many examples in Tokyo that fall under the realm of social studies and cultural anthropology. But Tokyo people don’t or can’t involve themselves in that discussion so easily. For one thing, they don’t have the vocabulary. And so they can’t personify the phenomenon, almost as if they are dancing feverishly away, without a thought. In his book of Japan, “Empire of Signs”, Roland Barthes depicts a very accurate analysis of Tokyo despite having spent only a brief time here. But Tokyoites are only able to continue looking at this with envy, and the thought of a debate on that leaves me speechless. This issue is alive with regards to photography and fine arts, as well. So maybe this lack of words or lack of arguments is rooted in Japanese culture.

F.N. In everyday life, careful and analytical thought doesn’ much exits. But I wonder whether that lack of language isn’t behind the shape of Tokyo today?

N.H. At first glance of the city, there is a certain language used to express interest about the level of architecture and design. And the same kind of expression comes out regarding modern Japanese photography. And as a phenomenon, I really think there is no country producing such exciting photographs as Japan right now. Still people at the center of it are not firmly grounded.

Naoya Hatakeyama
One of Japan’s most representative photographers, particularly in the field of Contemporary Art. He has developed a language dedicated to the visual arts by presenting photography as a device for recognising the world.

Samuel Fuyumi Namioka
A long-term resident in Italy and former Art Attaché at the Japanese Institute in Rome. He is currently a curator at the Centre for Contemporary Art Luigi Pecci in Prato, Italy.

Naoya Hatakeyama – A conversation with the art curator, Fuyumi Namioka